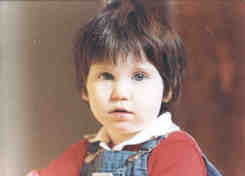 Cole grew up in a small and primarily Jewish community called White Meadow Lake in Rockaway, New Jersey.  He gained an early and immediate interest in theatre (and breeches roles) while on a Girl Scout trip in the third grade to see The King and I at an all-girls high school.  Throughout childhood, Cole helped make independent short films (aka home movies) with his dad and the family “company”: GGAGGVAP (or Greenberg Greenberg And Greenberg Greenberg Video Agency Productions). 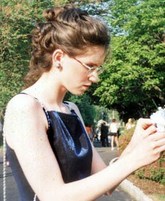 In high school, Cole participated in the stage crew of every school production, and performed a bit at the local community theatre (Townsquare Playhouse).  He also played on the sideline percussion of the Morris Hills Marching Scarlet Knights, and was a Varsity starting fencer from his sophomore year on.  Throughout high school, Cole competed in local fencing tournaments including Junior Olympic qualifiers.  Cole became captain of the girls' fencing team in his senior year, won the Outstanding Senior Athlete Award, and made the All-Area team.  He was then recruited to join the Varsity team at James Madison University. 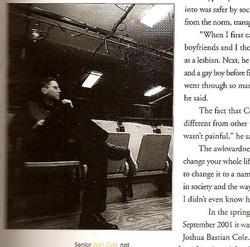 He went on to study technical theatre and lighting design at James Madison University where he discovered he wasn’t a very good designer (way too much math).  However, he excelled in theatre and art history classes and acting classes.
Cole was selected for the Study Abroad program in London in conjunction with University College London and Shakespeare's Globe.
He left London just a few days early because he was also the recipient of the Army ROTC Scholarship and attended Basic Training at Fort Knox.
In his senior year, Cole was interviewed for a feature in the Harrisonburg Daily News Record and profiled in the James Madison yearbook, The Bluestone. 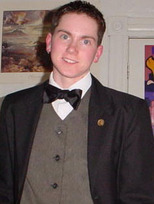 Shortly following graduation from JMU, Cole moved to Roanoke, Virginia.  In his first year in town, he was asked to write a piece to be published in the second edition of Mary Boenke's Trans Forming Families.  He also spoke at the first ever Lynchburg Pride.  While in Roanoke, he was filmed by Christy Pessagno for her short film, Gay Motherfuckers, which was shown in the Tribeca Film Festival.
Cole start teaching himself choreography during this time.

After two years in Roanoke, Cole moved further south to Durham, North Carolina, and later, Chapel Hill.  Over his five years as a North Carolinian, Cole traveled extensively acting in films and modeling in San Francisco, Seattle, Chicago, and New York City.  He is one of the North Carolina XX Boys and was interviewed by T Cooper for Out Magazine.
He started to write more frequently for publication and also wrote his first full-length play, Spheres and Cylinders in 2005.
Also in 2005, Cole began taking beginner ballet classes, and in 2008, he began taking regular dance classes at Ninth St. Dance in Durham, the host city of the American Dance Festival.

After stagnating in the south until 2009, Cole finally moved to the Big Apple, and eventually got his butt in grad school at the City University of New York, Brooklyn College.  At Brooklyn College, Cole was part of the Theatre History and Criticism program.  In his time there, he discovered a potential legacy of dramaturgical FTMs from the Greeks forward.  Cole loves to dig out classical characters that display FTM behavior and configure productions to emphasize this element of transgender spectatorship.  Intrinsic to FTM characters is, of course, FTM performers, and Cole is also devising actor training designed for trans men.

Cole writes original fictional plays with FTM leads who are romantic heroes, sarcastic assholes, excellent listeners, bad boyfriends, or people who buy groceries and do laundry… in other words, radical queer activist theater.
He also loves ballet, and wrote his master's thesis on FTM embodiment in relation to ballet. 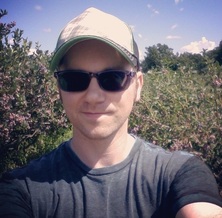 5 years in New York City was more than long enough. In 2014, Cole relocated from the Kensington neighborhood of Brooklyn to Winooski, Vermont, just outside of Burlington. In the fall of 2014, Cole was a paraeducator in the Special Education Department at Burlington High School. In downtime at the high school, he worked on applications to PhD theatre programs. In the spring of 2015, he became an adjunct lecturer in the Communication Department at the State University of New York at Plattsburgh. There he taught Intro to Public Speaking, Business and Professional Communication, and Media & Society. Also in the spring, Cole was notified that he was accepted to 3 out of 3 PhD programs. He decided to attend Cornell University. 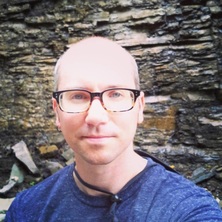 Cole relocated from Vermont back to the state of New York to attend Cornell University as a student in the Performing and Media Arts PhD program!
All images and content copyright © Joshua Bastian Cole 2018. All Rights Reserved.
Powered by